Today, I'm excited to share a guest post from Stephanie Falcos of Vegan on the Go. Stephanie is a fantastic vegan blogger and photographer, who recently revived a special tradition with a visit to Vancouver, BC's Organic Lives cafe. Read on to learn more about her experience and view pictures of her vegan sushi rolls. Stay tuned for vegan sushi recipes, and be sure to check out Stephanie's blog!

Though I love being vegan, one of the hardest things about transitioning was giving up a tradition I shared with my mom. On weekends, we used to go to all-you-can-eat sushi buffets, where we would eat everything from Yakisoba to our beloved California Rolls, to our hearts’ content. When I couldn’t continue this tradition with her, we were both disappointed.

As vegetarian for seven years, I had worked my way from eating no red meat, to no meat at all. Becoming even more conscious, I began to look into the animal bi-products I was consuming, and finally went vegan early this year; I had started to feel the same way about the eggs on my plate, as I had about eating the chicken that they had come from. I initially thought becoming vegan would be difficult, but, I changed my mind when I was at a friend’s house in Chicago, and his roommate cooked up an easy, delicious stir-fry. I decided then, that there was no reason for not making the commitment – even though I would miss my shared sushi tradition.


After poking around in my vegan cookbooks, I discovered vegan sushi. More recently, I discovered Organic Lives - an all raw organic café, in downtown Vancouver, BC, that serves an array of raw dishes, such as burgers, pasta, and amazing desserts. On the menu, they also have three amazing versions of raw, vegan sushi. 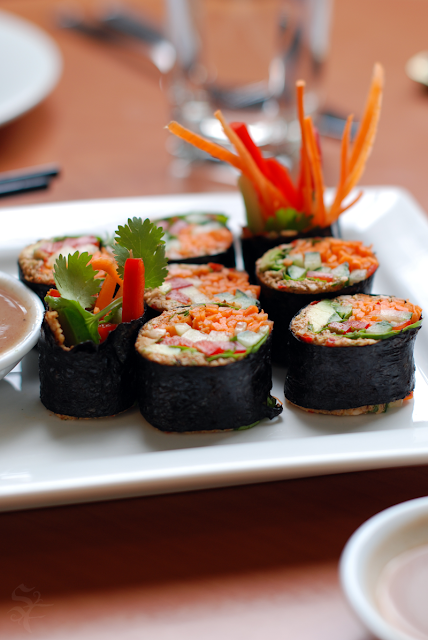 Photo credit: Stephanie Falcos
Last week, my mom and I made time to head there for lunch. She’s been very supportive of me being vegan, so we were both very excited to have this time together again.
Walking into Organic Lives, we saw tables at the front, but the place felt like more of a warehouse, with an added cafe. (A good portion of the space is dedicated to selling sprouted, organic products, and hosting raw food cooking lessons.) We ordered the Full Medley at the counter, and then took a seat. Our food took some time to come out, but raw food does sometimes take longer to prepare.
The first roll brought to us was the Sprouted Pecan. This sushi had no rice. (Since rice is cooked, it is not considered raw, unless it’s sprouted). I’ve never been a fan of white rice, because it’s very starchy, so having sushi with none made me very pleased.
The roll offered sweet mango, carrots, cucumber, alfalfa, and red pepper, finished with a pecan pate. I didn’t miss the rice, not in the slightest. The roll had such a complex texture: a crunch from the cucumber and carrots, balanced with the soft, delicate pate. It felt like I was eating a better version of the California roll, one without the harsh mayo and starchy grain. It was so fresh - a raw salad, wrapped comfortably in a nori roll. 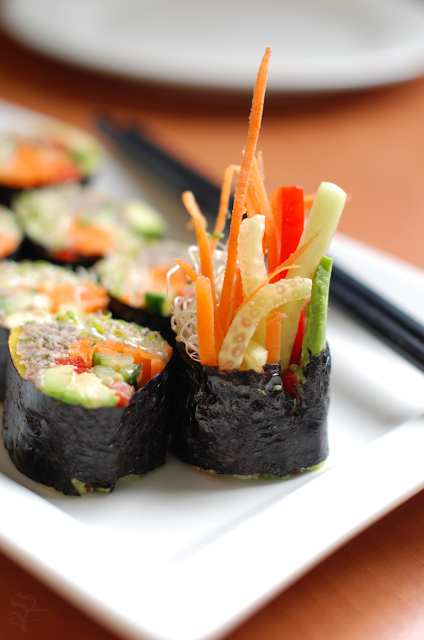 Photo Credit: Stephanie Falcos
Then, we sampled the Sea Veggie and “Rice” roll – the “rice” being made actually from kelp noodles. Joined with cucumber, red pepper, and cilantro, this roll was clearly nutritious, and beyond delicious. By far, it was the freshest and most original roll I’ve ever tasted. Kelp noodles have little flavor but have a fabulous texture, and feel airy on the tongue. Although the roll was heavy on the cilantro, I loved the sweet red pepper as its counterpart. Together with the cashew cream sauce, which had a little kick, this roll was refreshing.
Finally, we tasted the Sprouted Walnut roll. With a soft veggie-walnut pate, this roll had an unexpected, spicy twist to it. There was definitely a spice hidden in the pate - what I would assume was cayenne. With ground vegetables, red pepper and carrot, the Sprouted Walnut roll served as an interesting contrast and complement to the Sea Veggie and Rice roll. 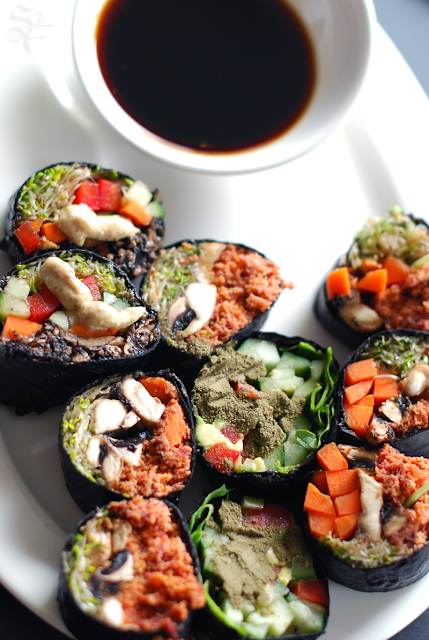 Photo Credit: Stephanie Falcos
My mom and I finished the meal with a delicious banana-chocolate cream pie, and a sweet heart-shaped cookie. The pie was so creamy and rich, that I would not have been able to tell that it was non-dairy. Although pricey - at $7.00 for a small slice - I thought the pie was a great way to end the meal and sooth the palate, particularly after the spicy Walnut Roll. The dipped coconut date chocolate cookie was an excellent partner. Dessert definitely matched up to the quality of the meal, but, with so many choices, it was difficult to decide on. I think I’ll try the raw apple pie on my next visit.
Overall, my mom and I were both extremely happy as we walked out of Organic Lives. Our meal left us satisfied (not bloated, like our previous sushi feasts had) and content, as it allowed us to bring a mother-daughter tradition back into our lives. Getting our quality time, with the healthier, humane choice, was well worth the trade.
STAY TUNED: Recipes for vegan sushi are coming up!
Posted by Julie at 12:00 PM

Email ThisBlogThis!Share to TwitterShare to FacebookShare to Pinterest
Labels: dining out, profiles

Julie
The Veg Post is a handpicked selection of the best veg stories, recipes, and news, delivered to your inbox weekly.